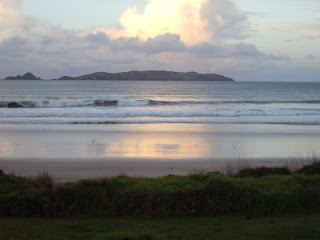 One of the things I like to do is read blogs by editors and agents. Apart from giving them a "human" face (because we all know agents and editors are either gods on pedastals or monsters), you can gain some useful insights into the process of acquiring manuscripts or taking on new clients. What they're looking for, what they aren't. We already know they're not looking for crazy people who pursue them into the bathroom at conferences. Or who call and berate them for not accepting a manuscript. But given that there are a lot of people writing novels or picture books or memoirs, etc., what are these agents and editors looking for?

Apart from the usual (specialising in certain kinds of books), they'll happily tell you they don't really know - but they'll know it when they see it. "Hmph!" you snort. "Coulda told you that already." They'll talk about things like a story that leaps off the page, an intriguing voice, a plot with a difference, characters you really care about ... all things that sound vague to many writers. How do you get these things? Do they come by magic? Why won't anyone tell me something precise and exact that I can use?

Well, it's an inexact business. Even publishers can't predict a best-seller: the first novel that takes off and sells hundreds of thousands of copies; the break-out million-seller from well-known author that seems like all his others; the diary story that's been done before but somehow this one strikes a chord with its audience. There's a big difference between Janet Evanovich's twelfth novel and "Cold Mountain" by Charles Frazier. JE's publishers were always going to get behind it and put the big money into publicity. "Cold Mountain" did it kind of on its own, from what I know. Or should I say, readers did it.

OK, so if there's no recipe for success, is there a recipe for not succeeding? Of course there is, and the one thing that I see mentioned over and over again is - the writer sent it out before it was ready. I've heard two examples recently of this. A fabulous idea, a great voice, but the writer hadn't learned how to craft it onto the page successfully. That's the key word - CRAFT. Craft takes time. Craft is not banging out a first draft and getting so excited that you immediately print out ten copies and mail it out to the ten biggest publishers.

Craft is five, ten or twenty drafts. Craft is giving it to experienced readers you trust and truly listening to their critiques, even if it hurts. Craft is going to seminars or courses to learn what you need to. Craft is reading and then trying to better the best books that you admire. In the Weekend Australian Review yesterday, M.J. Hyland talks about her new novel This is How. She says, about the first two years of working on the book: "it simply didn't work. The voice was wrong, the rhythm was wrong ... ", it was "an awful, awful two years". She adds, "I'm talking about not a dozen drafts, 25-plus rewrites, over and over ... I had to go back to the drawing board three times."

I've been guilty of it myself. You work on something for ages, and you've done three drafts, so you're convinced it's ready to go. But all the while, a little voice inside is saying, "Let it sit, and give it one more go." That's the voice to take notice of, the one that's saying you might be ready, but the manuscript isn't. Not yet.
(The photo is of Taupo Bay, in New Zealand, by the way. I always feel inspired when I'm there, which is not often enough!)
Posted by Sherryl at Sunday, June 28, 2009

I cringe when I think of the number of times I've been too impatient to listen to that little voice. But maybe those who learn by experience learn the best.
Look forward to meeting you on Saturday, Sherryl.

I guess we all learn by our mistakes, don't we? If we didn't make them, we'd be perfect! I bet plenty of people have made this one, not just us.