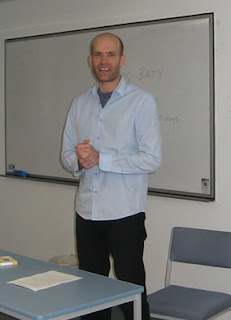 This week, we had a special guest speaker for our fiction writing classes - Chris Baty, better known as the guy who invented NaNoWriMo, or National Novel Writing Month. This takes place every November, and in 2008 nearly 120,000 signed up to try and write 50,000 words during the month - that's around 1667 words a day, every day.

Chris is a great promo for the whole concept of NaNo - he talked about the realities of committing to write that many words, and while he conceded that November was a bad month for students (and teachers with grading), really there is no bad or good month for writing. You will either make the time or you won't, and obviously many do.

He had lots of information about NaNo, and told us how it started - with a group of his friends in San Francisco. I love the image of a huge bunch of them (about 20) all heading into a cafe with their laptops and extension cords and power boards, taking over the tables, ordering lots of coffee, and then sitting together, writing. I'd never really thought about NaNo before as a group exercise. After all, most of us write alone, usually in silence or with our own selection of music. But now the idea of writing occasionally with a group (I mean writing a substantial amount of words, not doing a writing exercise or two) is something I'm getting quite interested in! 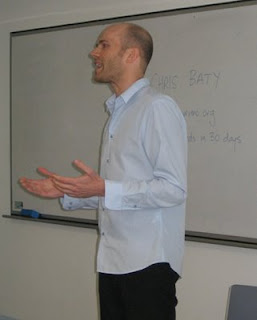 In a cafe would be even better. You could set a time limit for those who wanted or needed regular breaks (for me that would be to combat computer scrunch and RSI), and those who didn't want to stop or be interrupted could sit at a different table. I also like the idea of forming an email group, although inside the NaNo website, you can team up with your writing buddies and keep track of each other's word counts there. That's a great benefit when you're on opposite sides of the world.

The one big problem with Chris's talk today was that afterwards we all wanted to go out right there and then and sign up for NaNo and get started writing. Never mind anything else!!! But one of the other things he said that I liked was about not "saving" your special big novel idea for NaNo. That's something for you to work on and develop at the right pace and level when you're ready. NaNo is simply about writing. One student said to me that she was thinking about putting her memoir aside for NaNo and just having a go at a romance for the hell of it. That's the NaNo spirit!

Now we're talking about creating a student NaNo group when November approaches, and organising weekly get-togethers. The major work for the year will be nearly over, classes finish mid-November, and really, they'd have no excuse not to write!! And neither would we teachers. Now, I don't know about romance, but I think I feel a Western coming on...
Posted by Sherryl at Tuesday, April 28, 2009

I did NaNo last year for the first time, and let me be the first to say if you are on the fence about it, hop over. It was amazing. I'm a procrastinator by nature, so to have a specific goal of 50,000 words in a specific time frame was such a great motivator for me. And I haven't stopped since. I wrote my second novel during NaNo, and it really got me over the one-trick-pony fears. Now I'm in the midst of my third book, and I feel like an actual writer.

Terrific post! I enjoyed learning about the person behind NaNo. I'm signing up this year.

Yes, there's something about the freedom of NaNo - that you can write anything at all, and it doesn't have to be marvellous. It's the writing that counts. Chris also said that very often the quantity leads to quality - that we get ourselves in knots over perfect sentences and forget about story and flow. NaNo gives you permission to just run with with it, whatever "it" might be.

Wow! How did you get Mr. NaNo to come to Australia to speak to your class??? Wish I could have been a fly on the wall there. I will definitely do NaNo again this year--only I plan to do more outlining before so I don't meander all over creation next time!

He's been staying in Melbourne for a while - writing a novel! And meeting NaNo groups in Australia. One of our teachers heard that he was here and was able to get in contact with him.
Very fortunate for us!

I would love to hear Chris talk sometime.