Montmartre and the Arc 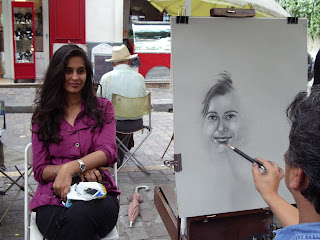 The first thing you discover about Montmartre is that it's on a hill. Which means either lots of steps, straight up, or steep streets. We found a street that curved around the back, a lot easier slope, and also found some other interesting sights as well. There's no way you can avoid the artists on the the hill, and in the main square, they are all wanting to draw your portrait.

This young woman here (like quite a few others) was sitting patiently being recreated on paper, while her boyfriend/husband stood behind the artist, filming it all. Made me wonder how I would be, writing while someone looked over my shoulder or filmed me. Actually, it would look pretty boring on film. There were many different styles of art for sale but a lot of the paintings were Montmartre street scenes, which didn't interest me at all. 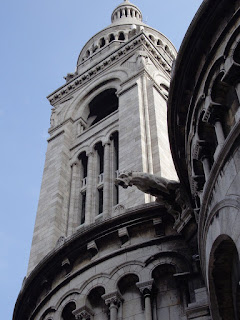 Sacre Coeur was beautiful inside and out - they don't allow any photos inside the church itself, no doubt because nobody ever took any notice of the NO Flashes signs. I resisted the urge to climb up 300 more steps to the top of the dome, and contented myself with photos of gargoyles.

Later in the afternoon, we walked along the Champs Elysee (my brother has now joined me), which was filled with people on the footpaths and cars in the street. Lots of cars. At the Arc de Triomphe, there were more cars. And no lanes. People drove around and stopped when they thought they needed to wait their turn, or so it seemed. Nobody hit anyone's car, and things kept moving, but driving around there would be a nightmare to me.

I haven't been in a bookshop for three whole days - am starting to feel withdrawal symptoms! At the moment, I'm reading An Arsonist's Guide to Writers' Homes in New England by Brock Clarke, and although I enjoyed the first 50 pages, it's starting to feel a bit wearing. I'm not a big fan of main characters who freely profess they are bumblers and then bumble their way through a whole novel. The urge to give this character a kick in his rear end makes me have to put the book down every so often. Must be all this walking I am doing...
Posted by Sherryl at Friday, September 12, 2008