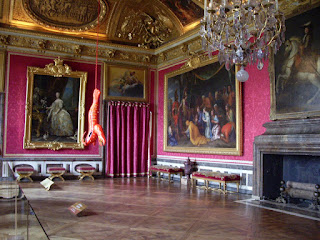 Today was Versailles day, and after accidentally getting on the wrong train (with a little quick backtracking) we arrived at the famous Chateau, stood in the queue for quite some time, and entered the building. We started with the Dauphin's quarters, which were quite plain and mostly held old paintings. Gradually the rooms became more and more ornate. The ceilings in particular are fantastic, with gilt carved architraves framing paintings that make your neck hurt to look up at them so far above you.

We'd kind of ignored a weird yellow thing in the front courtyard, but upstairs, there were more of them. Huge shiny objects that looked like helium balloons made out of aluminium, and plastic statues of things like Michael Jackson, and a bear with its arm around a policeman. I wouldn't have cared much, but they were in the king's and queen's rooms in the chateau, the ones we'd specifically come to see, and instead we had to crane around bits of bizarre plastic. Lucky us. We'd arrived on the first day of the Jeff Koons exhibition. Read all about it here.

In the article they talk about this: Last November Koons' "Hanging Heart" -- on show in Versailles -- became the most expensive work by a living artist when it was snapped up for 23.4 million dollars (15.1 million euros). Yep, saw that one too. Sorry, but it looked like it had escaped from the florists down the road on Valentine's Day. I am obviously a diehard Rodin fan, and Koons doesn't enthrall or excite me one tiny bit. The photo above is of his plastic red lobster, one of the less obstructive pieces (it was easier to dodge around). 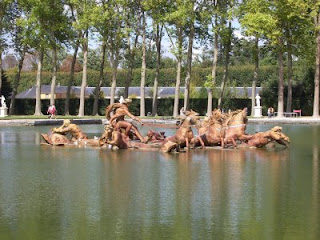 The gardens are beautiful, and I really wished some of the fountains were working. This is Apollo, with horses, emerging out of the water. Imagine this at sunset with the water spouts going (this pool and the Grand Canal below it are aligned with the setting sun).

Just as well it wasn't Christo, otherwise you might not have been able to get in!

Sounds like you're having a whale of a time. I'm enjoying the journey.