Rather than venture into Guangzhou (Canton) on my own, I decided to do a tour. This was mainly because our sortie to Dong Men quickly showed me that past Shenzhen's shopping area, hardly anyone spoke English so if I needed to find out how to get somewhere (or even catch a taxi) I'd have no hope. The tour was great - once I got over feeling like a sheep being herded everywhere - and I saw lots of fascinating things, including five of the terracotta warriors, a huge jade ship, one giant panda stuffing her face with bamboo, and a backstreet local market in Guangzhou that was astounding. I have restrained myself from posting my photo of the pile of gutted frogs. Instead here is a nice photo of a cage of snakes. Everything in this market was being sold for eating, and that included snakes, frogs, turtles, eels, scorpions, toads and fish. 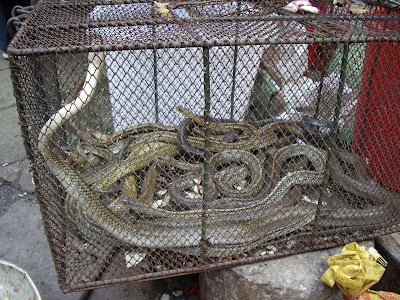 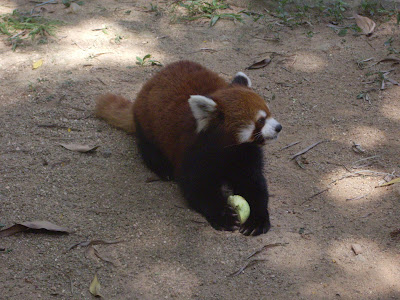 While I did get some photos of the giant panda behind a window, this guy was outside eating an apple - lesser panda (red) - and not at all bothered by us lining up along the fence to take photos. In fact, he looked kind of bored.
We also visited a kindergarten to hear a bunch of little kids sing to us, plus the Six Banyans Temple and a memorial to the founder of modern China. Plus a few other things.
Today I had a "time out" day and went to the movies. Quite a few people here had recommended Lust, Caution and said I should see it in its original version as it was likely to be cut for Australia. It was directed by Ang Lee (Brokeback Mountain) and was wonderful. One of those movies I shall be thinking about for days.
Yesterday I visited the Correctional Services Museum at Stanley. Lest you think I was desperate for entertainment, I actually thought it was the police museum. Instead I got the history of prisons in Hong Kong - very interesting, even if some of the photos made me feel a bit sick. Back to Australia tomorrow. Feels like I've been here for six weeks, not two!
For NaNoWriMo, I think I've managed about 12,000 words. Nowhere near 50, but a lot more than if I'd never bothered to try. I'm now a fair way into a new novel, so we'll see if it's any good or not when I'm back in work mode and feeling less critical and more clear-minded.

Those poor snakes! I take it that the red panda wasn't meant for the pot as well ...

Yeah, Snail, that's what I was thinking too!

Talking about movies being cut -- my mother took my son to a movie the other day, and it featured a girl having sex with a donkey. Neither Mum nor the kid were at all impressed!

No, the red panda was just being cute. The tour guide told us that people buy scorpions and put them in soups and stews. The heat kills the poison and the scorpions are good for your health.
I just kept thinking about them crunching between my teeth. Eerrcckk!