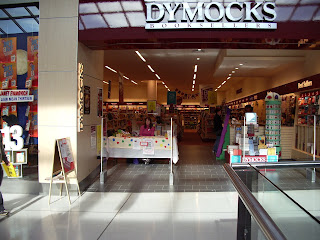 Yes, this is me at Dymocks Southland, doing a book signing gig. Notice the lack of people? Unlike a book launch, where you invite lots and lots of people and have champagne and celebrate, a book signing is "people by chance". The bookshop arranges for you to be there on a day when they are usually busy, with lots of customers and passing traffic, and you sit and look happy and approachable and wait for lots of people to buy your book and then you sign it.
I did meet some very nice people, and the bookshop staff at Dymocks were terrific, and we did sell two books. While sitting there, I noticed the number of kids who stopped and looked at the poster for the new Harry Potter book (due out in July) and argued over whether the cover on the poster was going to be the cover on the book ... and wondered if I should have hinted in some way that I was related to JKR ... (except I'm not).
Book signings are often like this, believe it or not. I think it's good to be there, to have your books on display, and chat to people. They might come back later and buy a book, or they might remember your books next time they're in the shop. Linda at Dymocks had made up little giveaways with my postcards, and I will go back next year when the Littlest Pirate picture book comes out and read at their Storytime morning. It's all good.
Unlike my rugby team, the All Blacks, who lost last night to the Wallabies. Grrrrr. We went to the game at the MCG and were overjoyed that not only did our team lose, but we had a bunch of idiots in front of us who spent most of the time standing up so we only saw half of the game. Makes me almost glad I can't afford to go to the World Cup in France in September. Children's author assaults rugby spectator never makes a good headline!
Onto books - just finished Golden by Jennifer Lynn Barnes. I wanted to read something in YA that is part of the latest hot genre - paranormal. Golden is about a girl who can see auras, and tell from their colours what the person is like and what mood they are in. All of the females in her family have the Sight in one way or another. It was interesting, but the aura stuff went on for ages and ages, focusing on the teenagers in the school and their relationships, then suddenly in the last 25% of the book, it turned into a murder-suspense story. It was an OK book, but felt a bit unbalanced, almost as if it changed horses mid-stream (excuse the cliche). I think teen and tween girls would like it. I felt an urge to ask the author to do another draft and make the first half stronger. But that might be the grumpy All Black supporter in me coming out this morning.
Posted by Sherryl at Sunday, July 01, 2007

Hmmm ... You could have threatened to reveal the end of the new Harry Potter if the kids didn't buy your book. That might also have been effective with the rugby fans. (Were they All Blacks or Wallabies fans? The headline might work in your favour depending on who they were and where you were selling the books.) (FWIW, if Hayman hadn't been such a nitwit, it might have been a different result)

And for something completely different ... consider yourself tagged with the Eight Random Facts meme.

I thought Golden suffered from a split personality, the way it morphed into a crime mystery without warning.
Teens struggling with social dynamics will enjoy the aura stuff in the novel. That was fun. But the ending was too silly to be truly satisfying.
And maybe it's an Australian thing, but I found the superficial gloss on the girl characters in this novel irritating in the extreme. So OC ( as in the tv series)

Sorry to hear about the signing, Sherryl, but NOT sorry about the AllBlacks losing :)
I'm a rare West Australian because I actually follow the rugby (most West Aussies couldn't care less) and watched the game with joy! I came to rugby-watching through having married an even rarer West Aussie - who not only watches it but actually played in his younger years. He'll be in Sydney this weekend watching the Wallabies win for the second weekend running. Makes a nice chnage :)