Have now been here nearly two weeks and am getting ready to return to Australia. It's been a long haul this time, with lots of training and meetings and discussions. Too tired even to read most nights! And although I did discover a local cyber place, I can only come here in school hours as after school, the place fills with screaming teenagers playing online games.
The Blogger site is in Chinese so I'm not sure how to use it - am guessing most of the time!
The weather has been mostly grey with a bit of rain. Everyone keeps telling us how unusual it is, and we should be having cool sunny days. Hmmm. And the pollution is a huge issue. I went out to Lantau Island yesterday (climbed the 260 steps to the big Buddha, with lots of rest stops) and it was so hazy you could hardly see two kilometres. Apart from the fact that people living here are starting to think about leaving, and some big companies are looking at relocating so they don't get sued by sick employees, they will kill tourism if they don't do something. No point going up the Peak if you can't see a thing.
A lot of Hong Kong-owned factories have apparently relocated into China and the pollution is coming from there where there are few emission controls.
But Hong Kong itself is as lively as ever. I'm staying in Wanchai and have wandered through the local markets a few times, staring at live fish in tanks, meat being cut up and displayed on the street, huge piles of dried seafood and flower shops that sell a bunch of orchids for the equivalent of AU$1.20.
The tourist markets are the same - lots of Americans here this time, and not just because the Kittyhawk is in the bay and sailors are everywhere (you can tell them by the really short hair). I have become used to eating noodles nearly every day, haven't missed coffee at all, and haven't been brave enough to try duck tongues or pig's knuckles.
Bought a collection of Chinese short stories but haven't read them yet. I've been deep in Louisiana, reading James Lee Burke's new Robicheaux novel. As always, fantastic description and a good story with lots of flawed characters that make you think about who is who in the world, and how do we really know the inner workings of most people.
Food for thought.
Posted by Sherryl at Wednesday, November 29, 2006 0 comments

Hmmm how to use Blogger when all the instructions and labels are in Chinese? You guess and hope the right buttons are in the same places.
Cyber cafes where a million kids and teenagers playing online computer games and smoking and shouting and shooting each other via the computer doesn't make for concentration or focus.
Two days of seminars and thick pollution so far - can't see the Xmas lights across the harbour because of the fog/smog.
Not enough sleeping hours. Hotel sends wake up call 6am first morning - good. Leave it in the system. Second morning 6am again. No sleeping in here.
TV viewing - a documentary on plastic surgery of film and pop stars. Horribly riveting.
Dinner beckons. Smoke in here is awful. Gotta go.
Posted by Sherryl at Saturday, November 18, 2006 1 comments 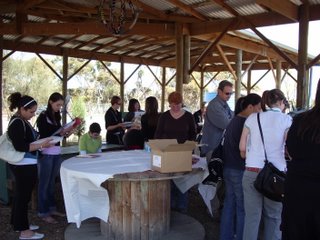 This is what you like to see at a magazine or book launch - the magazine arrives and everyone dives for a copy and is engrossed for the next ten minutes (ignoring the wine and food!). This is the launch yesterday of our new magazine "Lizard" - not a fiction and poetry mag but a collection of great articles about teaching and learning. You might think it sounds a little boring, but there's all sorts of topics - exchanges, the Clarion South workshop, model cars, the oldest student in the world, immigrant students experiences, just to name a few. And terrific images from our graphic arts students. By "our" I mean Victoria University. The launch was at Iramoo on our campus - Iramoo is where we have a sustainable environment precinct with 35 hectares of protected grasslands and also where we have a number of live-in lizards - the endangered legless lizard to be exact. Those people who have been to Building 10 on the campus will remember the strange yellow and brown exterior which is meant to represent the lizard also. And that's why the magazine is called "Lizard". If you live in Australia and would like a copy (yes, free!) just email Sue at profwritingtafe@vu.edu.au

Onto other bookish things - not surprisingly (to me) "On the Jellicoe Road" has just been favourably reviewed in the latest edition of Magpies, a journal of books for children/YA. The reviewer said, "Taylor's story is interspersed with out-of-sequence excerpts from Hannah's manuscript, weaving together the events of past and present - an effective technique that foreshadows events and builds reader interest." See - told you it was just me! The reviewer was obviously far more on the ball than I was ... no, actually I stand by my original comments.

And when I read a book like "Dairy Queen", which I did in one night this week (could not put it down!), I know that there are still books out there in the world that will capture me and hold me fast and give me huge pleasure and excitement to read. Quick synopsis - DJ lives on a dairy farm and is doing nearly all the farm work because Dad is injured. She's failing high school, feeling pretty unhappy (but not in a whiny, "why me" kind of way, which is why the voice works so well) and then Brian arrives. An arrogant football player from the neighbouring town who is sent to work on the farm as a test. DJ ends up training him in spite of herself, and discovers she is really good at it, and good enough at football to try out for her own school team. The only girl. Sounds unlikely? Catherine Gilbert Murdock makes it work, through the character and the voice, and also the details of farm life and footy training. Loved it. 5 stars.

I'm now reading Ian Rankin's latest, "Naming of the Dead". It was my bribe to get me through all that marking of student work. Nothing like Rebus waiting at the end of a million hours of reading, commenting and grading. I then dyed my hair to cheer myself up (hate to think how many new grey hairs I got from all that terrible grammar and punctuation) and dived into the Rankin novel. I mean, how hard is it to punctuate "I hate bad punctuation," she said. In case you're wondering, if I had a dollar for every time I saw a full stop after punctuation instead of a comma... and then, of course, Word gives she a capital S - She. Grrrr.

Am I writing? A new draft of a picture book - Draft No. 17 but who's counting? All that marking does give me a very critical eye to take back to my own manuscripts, if nothing else!

I finished "On the Jellicoe Road" a few days ago, and the second half (thankfully) was much better. Then I thought about my earlier comments - had I started reading it at the wrong time, and therefore wasn't concentrating properly? (I read the first 30 pages while waiting to go in for a small operation, but I don't think the anaesthetic was the problem.)
So I went back and re-read the first few pages again, and decided it was a bit of both. No, I hadn't really been giving the book 100%, but I also felt the author could have made it so much clearer what was going on. For those of you contemplating reading this book, here are some useful clues:
1. The parts in italics are not the main character dreaming or talking or writing something. They are actually a novel written by another character about things that happened 22 years ago. I'm not spoiling the story by telling you this - I'm ensuring that you don't get totally confused.
2. The main character is in a boarding school for kids no one wants. One of the school girls is from the nearby town. Nobody else in the school is.
3. The whole basis of the action in the story is this kind of wargame between the boarding school kids, the town kids and another bunch of boys on cadet camp. Why 18-year-olds would be playing the kind of game that 12-year-olds get off on was a bit beyond me. That's my main "credibility gripe".
4. The main character, even though she seems to be the "dead loss/hopeless case" of the school, is somehow made the head honcho of all the kids (by vote). Another credibility issue.
I have no doubt that lots of readers will disagree with me on this book, but I really don't see what is the point of not making simple things clear to the reader.
Enough grumping and groaning. I've just finished last year's Newbery Award winner, "Kira-Kira" by Cynthia Kadohata, and totally enjoyed the voice and character of Katie. The story is mostly set in Georgia in the 1950s, and Katie is the younger daughter in a Japanese family. Mum and Dad work in the chicken factories, saving for a house, and the older girl, Lynnie, is Katie's idol. The voice is terrific - naive but genuine - and Katie's journey to understanding how to survive in a difficult world is gentle but profound. Good example of 'less is more' - very little overwriting (if any).
Marking? About 60% achieved so far. 30 short stories to go. It's a little like being a magazine editor, only instead of rejections or acceptances, I have to give feedback on what I think is or is not working. The kind of thing we secretly wish all editors would do for our submissions.
In the last class, I gave the students something I had written about getting published, what it means to write or just call yourself a writer (there's a big difference), how to improve, how to survive after you give up the support of classes and constant, immediate feedback, what perseverance really means - all that stuff. I might put it up on my website, if I can work out how to create my circles diagram in Word.
And in response to someone in the newspaper recently who criticised the use of the word "stuff" - it's a very handy word, useful in all situations. A bit like "thingy" - right, Sue?
Posted by Sherryl at Saturday, November 04, 2006 8 comments